As the largest and longest-running, annual sumo competition worldwide, outside of Japan, the US Sumo Open is the first domestic event to bring Pro Sumo Grand Champions as special guests, the first to pioneer women’s matches in American tournaments, the first to feature multiple World Sumo Champions in a single event, and the first to include former top-ranked Pro Sumo wrestlers in competition!

The competition level is also spectacular, with over 700 international athletes who have wrestled. Most of these competitors are National or World Sumo Champions — from over 40 different countries. This is the only sumo event in North America where you can catch this caliber of international sumo, every single year!

SATURDAY, OCTOBER 24, 2020
Los Angeles, California
For the 20th Anniversary US Sumo Open (April 25), almost all 5,000 seats were already sold out by early-March, but the event was rescheduled to October 24 due to pandemic restrictions. Even on a smaller scale, 33 wrestlers from 6 countries competed in 98 intense matches! Unfortunately, the competition was not open to the public.

SATURDAY, MAY 12, 2018
Walter Pyramid @ California State Long Beach
This event featured some really spectacular matches, an extremely fast pace, and like last year, a demonstration of skill overcoming size!
There was also a dramatic shift of power from Mongolia and Japan . . to Russia and Ukraine, as fewer Asian competitors showed up this year, and those that did were plagued by injuries and upsets. Meanwhile, the Russian-speaking contingent was relentless.

SATURDAY, JUNE 17, 2017
Walter Pyramid @ California State Long Beach
This was the most dramatic competition yet! Former champions reclaimed glory, records were set, and a 245-pound athlete won the Openweight title!
The theme of 2017 was “upset city”, with many “smaller” wrestlers toppling the giants. Technique was king, and the audience got their money’s worth, as big man after big man fell off the stage.

SATURDAY, MAY 21, 2016
Walter Pyramid @ California State Long Beach
Byamba reclaimed glory, with a 13-0 record, winning both heavyweight and openweight divisions, undefeated. The competition level was spectacular, attracting many medallists from the World Sumo Championships, including Aron Rozum (Poland) and Batyr Altyev (Russia). Even Olympic wrestling gold medallist Karam Gaber, trying sumo for the first time, could not get past the quarter-finals in the middleweight division!

SATURDAY, AUGUST 8, 2015
Walter Pyramid @ California State Long Beach
Nearly 4,000 fans watched history being made, as Byamba’s 8-year streak of gold medals was ended at last by Egypt’s Ramy Elgazar and Roy Sims (USA). In fact, Roy Sims became the first American EVER to win a US Sumo Open gold medal in either men’s heavyweight or openweight!

SUNDAY, SEPTEMBER 15, 2013
JACCC Plaza, Los Angeles, CA
Nearly 4,000 people showed up to watch, at a venue with 3,000 seats. The packed crowd saw Byamba continued his amazing winning streak, by capturing the gold medal for the 7th year in a row, completely unprecedented! Byamba’s unforgettable “Sumo Slam” (which even shook the internet!) brought sumo awareness worldwide to a new level.

SUNDAY, AUGUST 22, 2010
Anaheim Sheraton Park Hotel, Anaheim, CA
Mongolians won most of the men’s medals, even as other foreigners (from Tonga and Canada) came close, as the event took place for the first time in Orange County, in front of an over-capacity crowd. Byamba continued his gold medal winning streak, for the 4th year in a row!

SATURDAY, SEPTEMBER 26, 2009
Redondo Beach, CA
Coupled with the US Sumo Open competition, fans got a chance to meet with, eat with, and take photos with the sumo wrestlers at the conclusion of the matches. This “Sumo Bash” was truly a new sumo experience for many hard-core fans, and as expected, Mongolians led the way.

SATURDAY, SEPTEMBER 6, 2008
Los Angeles Memorial Sports Arena, Los Angeles, CA
Byambajav Ulambayar defeated giant Petar Stoyanov for the third consecutive time in the US Sumo Open (in the men’s heavyweight), but Petar then upset Byamba in the last match of the day — the Openweight Finals — to win his own gold medal! Other Mongolians were remarkable, too.

SATURDAY, APRIL 7, 2007
Los Angeles Memorial Sports Arena, Los Angeles, CA
Mongolian athletes captured every single men’s gold medal, and the only Mongolian female athlete won each class that she competed in. Foreign athletes controlled nearly every weight class. Of 12 men’s medals, 11 were captured by Europeans and Asians, with only one medal going to an American.

SUNDAY, APRIL 9, 2006
Los Angeles Convention Center, Los Angeles, CA
The competition level at the 6th annual was higher than at all past events, with 47 of the world’s top sumo wrestlers competing for prestige, prizes, and cash. As in years past, international teams dominated, as the 18 foreign athletes won most of the medals (13 out of 23). In fact, foreign athletes won gold medals in all 7 divisions they competed in!

SATURDAY, MARCH 19, 2005
Los Angeles Convention Center, Los Angeles, CA
Teams from around the world, headlined by a powerful Japanese team, met in the ring, held on an elevated stage (a first for international tournaments in this country). World Champion Kato was dominant, with other Japanese and foreign wrestlers taking most medals, in front of a packed crowd.

TUESDAY, APRIL 6, 2004
The New Otani Hotel & Garden, Los Angeles, CA
The 4th annual was filled with action and drama, as some of the world’s greatest amateur sumo athletes competed. Fierce rivalries among international competitors were highlighted in several semi-final and final matches. One of sumo’s greatest Yokozuna (Grand Champions) ever, MUSASHIMARU, attended from Japan, and was joined by a fellow pro, who officiated.

SUNDAY, AUGUST 25, 2002
UCLA John Wooden Center, Los Angeles, CA
This competition featured 50 international sumo champions from 13 countries, including several national and world champions! The competition was fierce, dominated by foreign teams. American athletes only did well in the men’s lightweight, while a group of well-trained European teams took most of the medals. 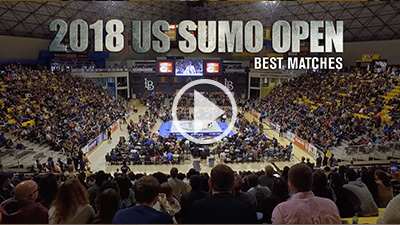 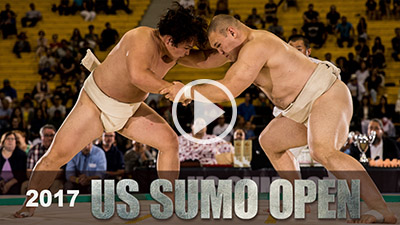 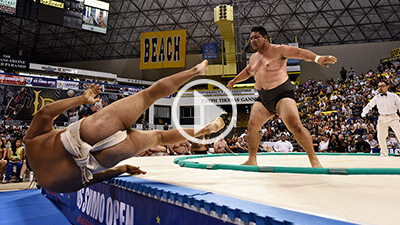 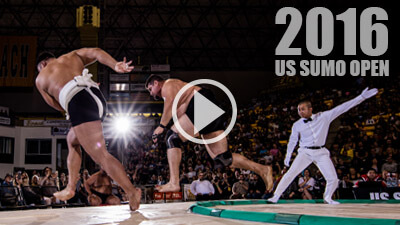 We use cookies to ensure that we give you the best experience on our website. If you continue to use this site, we will assume that you accept this usage. Privacy PolicyOk